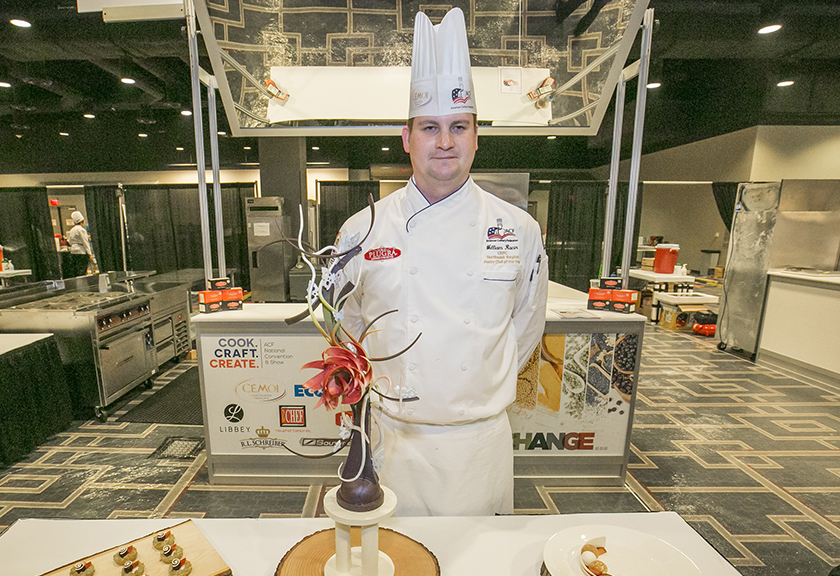 Westmoreland’s School of Culinary Arts and Hospitality recently welcomed accomplished and award-winning Chef William Racin to the faculty as a full-time Baking and Pastry instructor.

Racin joined Westmoreland in the fall with more than 18 years of experience in fine dining restaurants and boutique hotels. Originally from Mantua, OH, Racin received his culinary training at The Culinary Institute of America in St. Helena, California.

“I grew up with older brothers who were already cooking professionally at relatively young ages,” Racin said. “I was immediately hooked by the creative possibilities that exist within culinary arts and I was attracted to the camaraderie and teamwork necessary to successfully run a food service operation.”

After traveling across the United States and working in fine hotels and restaurants along the way, Racin arrived in Pittsburgh in 2008. The following year, he took over as the Pastry Chef at the Duquesne Club, where he oversaw a team of eight pastry cooks for the next 13 years.

He was also involved in the Westmoreland Culinary Arts programs in different ways during that time, including serving on the Occupational Advisory Committee, teaching Sugar Art and Design Techniques, and overseeing apprentices from the program. Racin likes to think of teaching as a magic trick.

“The students are so eager to learn and it reminds me of an audience ready to be amazed,” he said. “Every once in a while, I demonstrate a technique and the look of bewilderment in the students face is my favorite part. It's as though a magic trick was performed in front of their eyes and the look of excitement and curiosity is very rewarding to me.”

Racin is involved with the American Culinary Federation (ACF) locally, regionally and nationally. He is quite active in the local chapter ACF Pittsburgh and was named Chapter Chef of the Year in 2019. He was named National Pastry Chef of the Year by the ACF in 2018.

Racin has also competed at the regional, national and international levels. In 2016, he won the Regional Pastry Chef challenge through the Chaine des Rotissuers. Racin was awarded a gold medal at the World Semi-Finals Global Pastry Chef Challenge in 2019.

“This can be a very rigorous industry,” Racin said. The most important question the students should be asking themselves is ‘Do I want to be a craftsman?’ The attention to detail, efficiency, and grit that is required to be a true craftsman is the driving force that pushes one forward.”