Recognizing the Achievements of Our Alumni

Since 1992, Westmoreland has recognized one of our many distinguished alumni at our spring commencement ceremonies. We do this to honor our alums who have taken their education and experience from Westmoreland and utilized it to achieve substantial levels of success while giving back to the community.

The achievements of our distinguished alums lead the way for our current and prospective students, emphasizing the distinct benefits to starting one's academic career at Westmoreland! 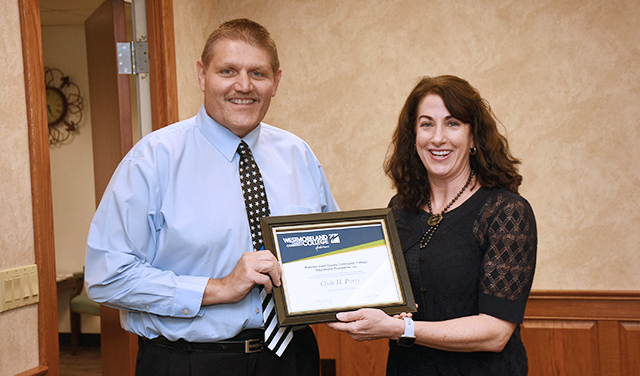 Westmoreland County Community College presented Clyde Parry of Coral Springs, Florida with the 2019 Distinguished Alumnus at the 48th commencement ceremony held May 9, 2019 at the Youngwood campus.

Born and raised in Jeannette, Parry graduated with honors from Westmoreland in 1985 earning an associate degree in Law Enforcement and Police Science. He also attended the college’s Act 120 Municipal Police Academy and began his law enforcement career in 1986 with the Derry Borough Police Department.

Parry joined the Coral Springs Police Department in 1987 and, over his 31-year career with the department, worked his way up through the ranks from patrol officer to deputy chief to currently being the chief of police

Parry was the acting police chief on February 14, 2018, the day of the Marjory Stoneman Douglas School shooting in Parkland, Florida. He oversaw the Coral Springs Police Department's response to the shooting. In March 2018, he was officially named chief of police and spent the year after the shooting guiding his department through the aftermath of that tragic event.

Parry also oversaw the examination of his department's response to the tragedy while preparing to provide testimony to the panel empowered to investigate the shooting. He provided hours of testimony to the Marjory Stoneman Douglas Public Safety Commission. The Coral Springs Police Department is widely thought of as the department that heroically responded to the Parkland shooting and saved the lives of 17 wounded children.

“It is our extreme pleasure to honor Clyde as our Distinguished Alumnus,” said Dr. Tuesday Stanley, president, Westmoreland County Community College. “His service to the community is matched only by his endless dedication to protecting the lives of so many.”

Parry has received numerous accolades including being named Officer of the Year in 2002 and Supervisor of the Year in 2007. His was also the recipient of The Outstanding Law Enforcement Officer Award from the United States Attorney’s Office, an Exceptional Police Initiative Commendation, a Unit Citation, a Team Citation Award, and has additionally received numerous letters of commendation from both the public and other law enforcement agencies throughout his career.

In addition to being a Westmoreland graduate, Parry holds a bachelor of science degree in Criminal Justice from Columbia Southern University. He is a graduate of the Police Executive Research Forum’s Senior Management Institute for Police, the Law Enforcement Executive Development Academy’s (LEEDA) Command Institution for Law Enforcement Executives and the prestigious FBI National Academy.

“It is truly a pleasure, and an honor, to be able to come back to where it all started for me and share a special evening with the 48th commencement class, “ said Parry. “It is my hope that one of the members of this graduating class comes back and addresses another class in the future. I wish them all the best.”

During his off-time, he devotes time to coaching the Coral Springs Chargers traveling tackle football club which he has done for over 20 years. He also often returns home to Jeannette to visit his parents, Sue and Buck Parry, who still reside in Jeannette.